Pacemakers are incredible devices. They can transform and often save lives.

However, once you have a pacemaker fitted, that usually meant you could never have an MRI scan again.

In fact, many MRI units have a large warning sign advising patients with pacemakers not to even stand near the scanner.

This is because the powerful magnetic field generates electricity in the pacemaker device and the leads attaching the device to the patient.

This could cause it to heat up or malfunction – there have been cases where this was tried and the pacemaker stopped working – fortunately just temporarily!

However, many patients need MRI scans – MRI is often the best way to look at joints (eg knees), the brain or even the heart.

Pacemaker companies have been trying to build an MRI safe pacemaker for many years. The first to market was Medtronic. Their initial pacemaker did allow MRI scans, but not directly over the heart. Finally the company managed to build one that was completely immune to MRI. They released their first model to the European market on 17th March 2010.

Just like car manufacturers, the latest feature always appears in the top-end model first. The device released is called the Advisa DR MRI SureScan. This has many advanced features, as well as MRI compatibility. I am advised that Medtronic will convert their whole range to MRI compatibility in due course.

I heard about this new pacemaker just after it was launched – the company rep had been round to talk about it. It so happened that a patient who really did need regular MRI scans presented to Colchester Hospital a week later! Naturally, we did not have this new model on our shelf yet. However, before 9AM, I phoned  the rep to ask her if she could get a hold of one. It was her birthday and she was off, planning on spending time with her mother. It was also April 1st. She thought my call was an April fool. After a bit of convincing, she drove from her home in Romford and picked up the new device and leads, before driving to 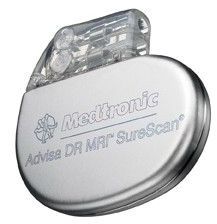 Colchester. She arrived mid-morning and we fitted the device at noon.

The device looks like any other pacemaker.  However, the leads do look and feel different from normal leads. They are slightly thicker than normal leads and they only come in the “screw-in” design. These leads have a small corkscrew at their tip – by turning the inner core of the lead from the top-end, you can screw the other end into the heart. This helps keep it in place. The company claim that after 6 weeks, the leads have bedded in enough to be safe to allow MRI scans.